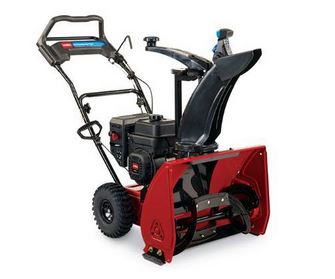 The Toro Power Clear is a single-stage snow blower design that offers an affordable and easy-to-use method to clearing snow from your driveway and sidewalk. Built to be light-weight and easy to maneuver, these Toro snow throwers are designed to handle small to medium sized paved areas with winding sidewalks.

Their single rubber paddle and/or auger design makes them ideal for regions that rarely get more than 1 ft of snowfall at a time. Single stage snow throwers perform best in light weight snow but also are efficient in handling wet heavy snowfalls as well. This Toro Snowblower can clean snow clear to the pavement like single stage while also being capable of handling large snowfall with its self propel drive like a two stage. This snowthrower is a viable option for almost any market. Toro Power Max Snow Blowers are a cost-effective and efficient method of clearing large amounts of snow from paved or gravel surfaces. These Toro snowthrowers are built to be durable on any surface and in any weather condition and are the only Toro snowblowers designed to clear gravel drives as well as smooth surfaces.

The Power Max series is ideal for the homeowner or professional dealing with a lot surface to clear and/or large snowfalls and drifts at a time. The Power Max allows the metal auger to first break down the heavy packed snow while the second stage is spinning at higher speeds to throw the snow.