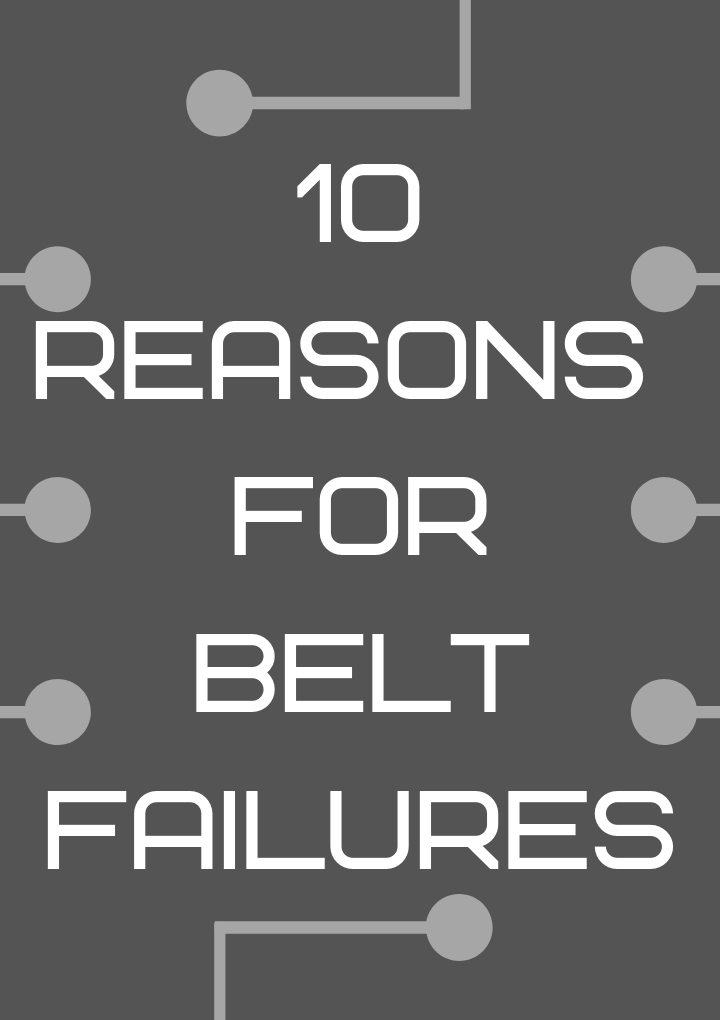 Exposure to oil and grease can cause the belt to swell, become soft, and the bottom envelope seam to “open up”.

3. Back Side of Belt Envelope is Worn Prematurely

Belt guides may have improper clearance or back side idler made be frozen.

Lack of protective shields or lack of periodically cleaning and maintenance.

Belt is burned by friction caused by lack of declutching by belt guides or something in the drive system is frozen or jammed (i.e. blade spindle bearing frozen).

7. Excessive wear on one side

8. Belt is narrowed or bulged in one spot and has a bend in it. It will not lay flat

Some of the load carrying members (cords) are broken due to shock load or improper installation.

9. Rapid wear where the belt contacts the sheaves

Slippage due to overloading or improper tension.

You may ask yourself, “if all these are known problems, why not build a better belt?”

Well, that’s exactly what John Deere did. John Deere belts have a variety of features that help combat the known issues for belt failure.

This is possible because of its increased flexibility range which reduces stress on the cords, increased heat dissipation which reduces cracking and damage to the rubber compound in the belt from abrasion or nicks. In other words, less stress + less heat = less down time = less cost

You may be asking yourself, what is aramid and what difference does it make. Aramid is a class of heat resistant and strong synthetic fibers often used in aerospace and military applications (body armor and ballistic components). In the early 1960’s DuPont released the synthetic fiber HT-1, also known commonly as Nomex, now days similar materials are known by names such as Taparan or Kevlar.

So, what makes aramid better than traditional nylon and polyester cords which breakdown quickly and have lower tensile strengths? Without getting to much into the science behind the creation of aramid fibers, the manufactured fiber contains a long-chain synthetic polyamide in which 85 of the amide linkages (-CO-NH-) are directly attached to two aromatic rings.

In layman’s terms this means that the tensile strength (chemical bond) is very high while also being very resistant to heat. The melting point of aramid fibers are in excess of 500 degrees Celsius (932 degrees Fahrenheit) and the increased tensile strength means less stretching which means belts won’t slip off pulleys or lose power over time.

The rubber cores in John Deere belts are made from a premium rubber compound which is resists both heat and cracking. The rubber core serves to hold the aramid cords in the proper alignment which allows the belt to maintain its designed strength. This is accomplished by infusing the rubber core with specific fabric fibers. The rubber core also is specifically designed to handle the bends that come from normal use.

Belt supplier and John Deere design engineers collaborate in the design process of all the belts using proprietary Drive Pro software which allows the engineers to input specific drive system parameters and output optimum lengths and materials for various applications.

They then revise the design through various applications and tests to determine cord amounts, diameters, and belt layouts in order to reduce stress distribution. The belts are not tested on a generic drive system, rather, they are both lab and field tested in various conditions (hot, cold, wet, dry, sandy, etc.) and must meet performance and durability standards before they approved for production.

John Deere Deck Belts can be found on online HERE