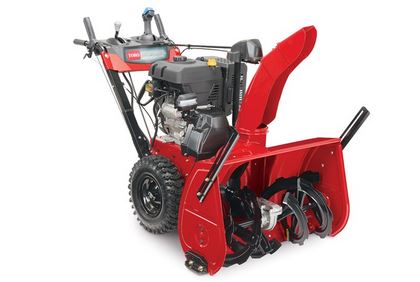 Commercial grade two stage snow blowers are built for long days and nights of clearing deep snowfalls. Everything on commercial snowblower models have been upgraded – from engines and gears to clearing width and additional features such as skid shoes and powered steering. All high end snow blowers offer powered steering as an optional feature if it’s not already standard on the snowblower model. The commercial grade two stage snowblowers differ in that they are using higher quality components in the axle for smooth engaging and disengaging over extended periods of use.
The powered steering feature allows for better traction when clearing snow requires multiple passes back and forth. Commercial grade two stage snowblowers are available with both wheels and tracks as the drive-train option. While wheels are most common on all types of snow throwers, tracks are a beneficial upgrade on the larger commercial snowblowers. Using a track drive system allows for the snowblower to climb hills better as well as burrow into deep snow drifts without losing an traction. Although tracks can be an expensive upgrade to a two stage snowblower, they can be incredibly beneficial and a worthwhile investment for the right commercial snow removal individual or company.